I was reading an article over on Cyberbrethren on some insightful aspects of Reformation day celebrations (What was tragic about the Lutheran Reformation? / How Should We Celebrate Reformation Sunday?). It appears that the whole idea of celebrating Reformation stirs up some angst in some folks. This is understandable since over the years I have seen many a naïve person who cannot grasp the whole idea of winning a war whether it be a spiritual one or a physical one. These are the people who will complain to the pastor when he selects a hymn from the section of the hymnbook labeled church militant. These are the ones who are always caught up in an erroneous idea that all wars are wrong, therefore victory should never be celebrated. Well then, let us quit calling Good Friday good and let us quit celebrating Easter if that be the case. This is all part of that liberal guilt mindset that some really need to get over. But we as conservative Lutherans celebrate in spite of the naysayers who mistakenly think celebration of any victory is a bad idea.
We as Lutherans do celebrate these two occasions because we recognize the victory that has been won by Jesus Christ over sin, death, and power of the devil. Years ago I remember hearing a missionary story of Christians in a far-off land, who took the phrase Good Friday, quite literally—celebrating Christ's death with upbeat music and the like in contrast to the somberness of German Lenten hymnody. This treatment of Good Friday seems quite odd to an American Lutheran who tends to over-emphasize the penitential side of Good Friday (in opposition to the reformed tendency to gloss sin and its consequences). Be that as it may, in an effort to solve one problem, we have perhaps created another. Thus those excessively penitential Lutherans tend to fail to grasp the offsetting and balancing victory that has transpired as a result of Christ’s death. So let us as Lutherans not let worldly culture divert us from celebrating all three events because they truly signify God's victory over sin, death, and error.
The writer at First Things (Joshua Genig), even has a problem with the liturgical color red assigned for the day. After listing some of the principal Lutheran Reformation actors of the day who survived Rome’s fury unscathed, the author lets his fractured view of Reformation history steer his angst. For if one reads beyond the sanitized and Sunday School friendly versions of 16th and 17th century Reformation history, one finds the cold, dark reality of many, many Lutheran martyrs in Martin Luther's day and beyond whose deaths are often ignored or forgotten by those who think only the elite leaders of the church are worthy of their commemoration. To the contrary, LSB hymn number 678 speaks of these "unsung saints" whose story will never be told, but whose sacrifice will never be forgotten by those of us who respect and honor these unknown saints who died for the Faith. So bloody red it should be!
The Reformation needs no apology. False doctrine is false doctrine and it is always wrong. One should never be sad or apologetic for being right with God on the basis of Holy Scripture alone. The people that need to repent are the ones who martyred the unsung Lutheran saints and many others mentioned above. John Paul II has apologized (2000, 2004) for the deaths of those Christian souls who died in the Inquisition. Us Lutherans are still waiting for a pope to lift the anathemas announced at the Council of Trent against those Lutherans who believe with that of God the Holy Spirit and St. Paul: justification by grace through faith apart from works (Eph 2:8-9).
All of this eventually comes down to arguments of how to accomplish Christian unity between brothers who hold diametrically opposing doctrines. Our position as Lutherans towards the Roman Catholics is: come join us and believe what the Holy Scriptures say alone. And for good measure, throw in the clarification of God's Word that one finds in the Lutheran Confessions. Roman Catholics on the other hand, make the siren call: come join us and believe what we believe, based on tradition and the counsel of men. These approaches are miles apart and irreconcilable in this life.
One side will have to blink. Biblical Lutherans need to continue to show their patience and wait for the errorists to blink. In the meantime, I'm not going to let some hand wringer spoil my celebrating the Reformation—a period of time when God and his Reformation people came out victorious over errorists in His church.
Posted by jrshaw at 11/15/2011 10:35:00 PM

Constructive, clarifying and insightful comments are appreciated. Spam will be deleted and troll comments will be highly scrutinized. 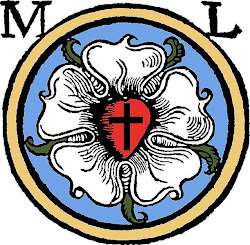 Discussion of contemporary issues confronting the Evangelical Lutheran Church from a conservative and confessional perspective. Insightful comments are welcome. Please "+1" the posts you like.